BAYPORT, Minn., April 6, 2017 – Andersen Corporation, including Renewal by Andersen, has been named a 2017 ENERGY STAR® Partner of the Year – Sustained Excellence Award winner, the highest honor given for continued leadership in protecting the environment through superior energy efficiency achievements. Andersen’s accomplishments will be recognized by the U.S. Environmental Protection Agency and the U.S. Department of Energy in Washington, D.C. on April 26, 2017.

An ENERGY STAR® partner since the Windows program began in 1998, Andersen is known for its long history of leadership in producing energy-efficient products. Andersen was the first window manufacturer awarded the ENERGY STAR National Window Partner of the Year in 1999.

Andersen’s leadership in energy efficiency is exemplified through products that have helped set industry standards for minimizing environmental impacts while maximizing energy efficiency, performance, and durability for customers.  Andersen’s dedication to promoting the ENERGY STAR program is centered on advancing energy-efficient products within its four major brands, and educating all stakeholders about the benefits of ENERGY STAR certified products and programs.

Headquartered in Bayport, Minnesota, Andersen Corporation and its subsidiaries manufacture and market window and door products under the Andersen®, Renewal by Andersen®, Silver Line® and American Craftsman® brands. Andersen was founded in 1903 and employs nearly 11,000 people in locations across North America. Andersen is a privately held company. Visit us at andersencorporation.com.

About Renewal by Andersen

As the start-to-finish window replacement division of Andersen Corporation, Renewal by Andersen’s Signature Service is committed to giving you the best customer experience possible, through the perfect combination of the best people in the industry, a superior process and an exclusive product through one of the largest nationwide networks of window replacement specialists. For a complimentary in-home consultation, or to view more information about Renewal, by Andersen visit renewalbyandersen.com.

ENERGY STAR® has 16,000 partners working to protect the environment through greater energy efficiency, including manufacturers, retailers, public schools, hospitals, real estate companies, and home builders. Since 1992, ENERGY STAR and its partners have saved American families and businesses $430 billion on their energy bills and 4.6 trillion kilowatt-hours of energy, while achieving broad emissions reductions—including 2.8 billion metric tons of greenhouse gas emissions. For 25 years, EPA’s ENERGY STAR program has been America’s resource for saving energy and protecting the environment. Join the millions already making a difference at energystar.gov.

ENERGY STAR” is a registered trademark of the U.S. Environmental Protection Agency.

“Solar*Rewards Community” is a registered trademark of Xcel Energy Inc.

“Andersen” and all other marks where denoted are trademarks of Andersen Corporation and its subsidiaries. All rights reserved. 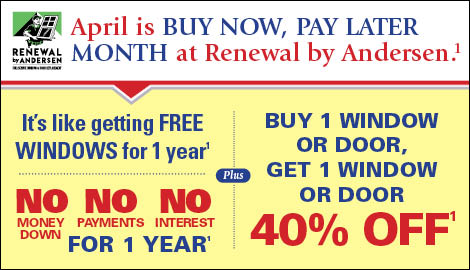