You are here: Home / Renewal by Andersen / Problems with Replacement Vinyl Windows in Phoenix and Las Vegas

Problems with Replacement Vinyl Windows in Phoenix and Las Vegas

When one goes shopping for replacement windows, it is good to know all the features of each product so you can make the right decision as to which one would work best for your home and region.In both Phoenix and Las Vegas, your home is exposed to one of the harshest environments found anywhere. The same cloud-free weather that brings so many retirees to this part of the country also brings high temperatures and low humidity. This same combination tends to dry-out most building materials.

One of the most popular choices in Replacement Windows in Phoenix and Las Vegas is Vinyl windows.

Vinyl windows are made of Poly Vinyl Chloride (PVC).
PCV is made up of almost an equal amount of chlorine (from table salt) and ethylene (from petroleum). Windows and plumbing pipes are made from rigid PVC, a type also know as “uPVC”. Shower curtains, plastic bags and electrical wire coverings are made from a more flexible form know as plasticized PVC.

The main problem with vinyl windows is that they are not as stiff as wood or aluminum ones because of their lightweight framing and also because vinyl has a relatively low melting point. In fact, vinyl starts to soften at a mere 147 degrees Fahrenheit .

If the vinyl window frame heats up excessively, it can warp and once it cools stay in that “bent” shape. You may have seen sun exposed PVC water pipes do this and there is no way to get it back to it’s original shape.

In this example there is a permanent bow to the top rail of this window sash.

Just like PVC water pipes become brittle and crack over time, so do your replacement vinyl windows in Phoenix and Las Vegas,

When you have temperature changes PVC expands and contracts more than glass, aluminum or wood does. The affect this has to glazing, where the glass meets the sash or frame makes it more prone to leaks as well. Insulated glass seal failure is more common in vinyl windows due to the affect of overexposure to water that is trapped in the area beneath the glass.

In the examples below you can see the glazing sagging in the “sealed” glass unit, which eventually will lead to moisture infiltration in between the two panes of glass as seen on the photo on the right.

Another problem with using vinyl as a window material is that it does not allow much to stick to it, so sealants and caulking separate from the material after a short period of time. This allows both air and water to get in between the window and the house framing.

Water damage to the wood structure beneath the vinyl window due to sealant failure is a common cause of rotted wood. To prevent this all gaps between the brick mold caps and window must continuously checked and re-sealed.
Since PVC or Vinyl Windows are not very flexible to begin with, the constant temperature fluctuations that your windows endure in Phoenix or Las Vegas with temperatures sometimes well into the triple digits,will eventually permanently damage them.

So now that you know some of the inherent problems with Replacement Vinyl Windows in Las Vegas and Phoenix, you will be glad to know that there are better alternatives available.

One of these alternatives is Fibrex, a composite material made by Renewal by Andersen Windows.

To find out more about Fibrex, please visit

Renewal By Andersen of Phoenix and Las Vegas 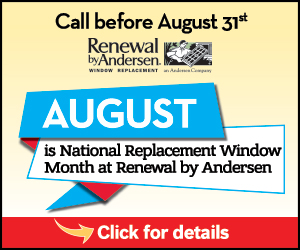